La Manufacture Canadienne de Crayons, Inc. was a short lived pencil company established in Marieville, Quebec in 1959. In English, this company was known as the Canadian Pencil Co. Ltd. (C.P.C.). This translated in French to La Cie Canadienne de Crayons Ltée. (C.C.C.). The factory was inaugurated in April 1960. It was the only purely Canadian pencil company during the 1960's, the others in Canada were all subsidiaries of U.S. companies. The company was around until at least the mid-1960's and may have eventually been incorporated into a new company.

From Le Courrier de St-Hyacinthe, jeudi 7 April 1960
Hon. Laurent Barré inaugurates a new plant in Marieville
The Hon. Laurent Barré, Minister of Agriculture in the cabinet of the Hon. Antonio Barrette, Premier of the Province, Member of Parliament for Rouville County at the Legislative Assembly, presided last Saturday at the opening of La Manufacture Canadienne de Crayons Inc. in Marieville.
​     After seeing the traditional ribbon cutting, the minister is happy to see a new industry in Marieville. "We need," he says, "small industries like yours, but it's important that they be built on a solid foundation for the prosperity of the city." Bishop Euclide Théberge, parish priest of the parish, proceeded to the blessing of the factory and wished the industry to take a considerable step forward for the benefit of the landowners and fellow citizens of Marievillie. Other guests said a few words, including Mayor Jean Beauregard. Then there was a visit to the factory.
La Manufacture Canadienne de Crayons Inc currently has some fifteen employees. It is the only French-Canadian pencil company established in Canada. A reception followed, at which besides the appointed persons, MM. Roger Parent and Guy Renaud owners of the plant; Ovila Goyette, secretary of the municipality, MM. Arthur Ostiguy, Ephrem Robidoux and Lueien Guité, alderman. 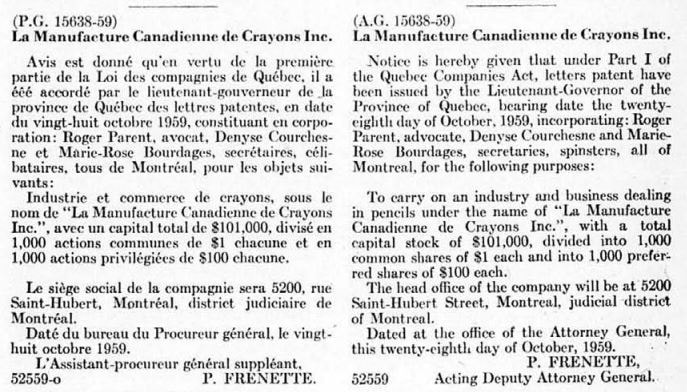