A Short History of the Eberhard Faber Pencil Co. of Canada

From Le Clairon (Saint-Hyacinthe, QC), Friday, June 29, 1951
Inauguration of a plant at Acton Vale
Acton-Vale, June 28, 1951 - A new branch of the Eberhard Faber Pencil Co. of Canada, was officially opened in our city, in the presence of M.T.R. Rudel, president of the company. The ceremony took place on Thursday, June 28th.
Visitors were admitted to the factory, where they were able to appreciate the importance and complexity of this industry. A reception followed the factory's visit and speeches were made by senior officials of the company and their guests.
Last May, the Eberhard Faber Pencil Co. announced its intention to come to Acton Vale, where it was able to take possession of a large building built by the city of Acton Vale and which was occupied for some time by the Selby Furniture Co.
This building is built on a lot of 120,000 square feet and is 200 feet long by 80 feet wide.
​  Another advantage of the site is that it is close to the Canadian National Railways, not far from the Acton Rubber Co.
The company specializes in the manufacture of eraser pencils, leads, fountain pens and various other office items. Its name is famous throughout the United States and Canada. In the beginning, 75 to 100 people will be employed under the guidance of a few experts.
From Le Clairon (Saint-Hyacinthe, QC), Thursday, July 14, 1960
A vulcanization plant in Acton Vale
The mayor of Acton Vale, Mr. Roger Labrèque, has lifted the first shovelful in recent days at the place where the annex that the company Eberhard Faber Pencil of Canada Ltd. will be erected will be erected. planned to build at the factory it owns in this municipality. The new building will receive the machines that will be used to fully vulcanize on site the raw rubber used by the company to manufacture the products it sells.
The construction contract which will measure approximately 60 ft. per 200 ft. was entrusted to a contractor from Acton Vale, Mr. Brosseau Goulet. The price is set at $ 75,000. The total cost of the building and machinery is estimated at a quarter of a million dollars. The factory should be finished to install in 1961 and provide work for about twenty workers.
The company Eberhard Faber Pencil of Canada Ltd. will be the first to fully vulcanize its rubber on site.
From Le Courrier de St-Hyacinthe, November 9, 1977
Better days at Eberhard Faber Ltd
In August, the company Eberhard Faber gave a notice of closure of the factory in Acton Vale.
As they were working on a new work contract; at the same time, it was rumored that the company Dixon Pencil was acquiring the Eberhard Faber factory.
The recent signing of a two-year collective agreement means that today the situation is completely different and that workers can look forward to the future with greater peace of mind.
​  Not only will the plant not close, but it is currently *unofficial* (official soon) that the plant will be handed over to the Dixon Pencil Company.
The signing of the labor contract was an integral part of the purchase of Eberhard Faber by the Dixon company.
Some advances indicate that the Dixon Pencil company, in addition to continuing Eberhard Faber's current operations, would add some operations from its US plant, which would have the effect of increasing the number of workers in the near future.
It is also thinking that Dixon over time will expand its market in Canada.
This is certainly an important step for the city of Acton Vale in the face of the serious problem caused by the closure of the Acton Shoes plant. 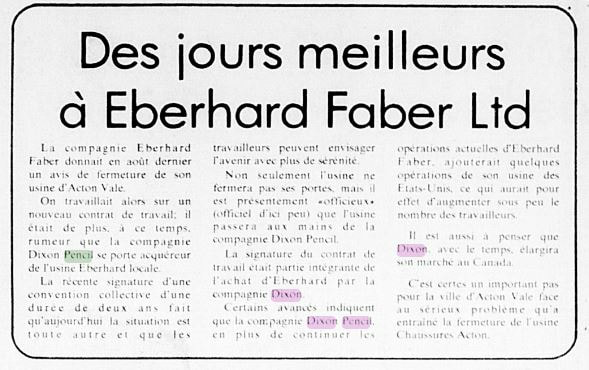 From La Voix de l'Est, Acton Vale, September 20, 2005
"All good things have an end..."
Dixon Ticonderoga plant to cease operations in October
A whole page of Acton Vale's history will be turned next month when the Dixon Ticonderoga factory will close its doors, also a victim of Asian competition; Eleven people will then lose their jobs.
"All good things have an end. It is not a surprise; we have known this since July. But it is very difficult for the majority of employees who have an average of 30 years of seniority, " recognizes the director of the factory, Isabelle Marquis.
The specter of closure had been in the air for several years already. In 2000, the company first announced plans to cease operations at Acton Vale, where it has been present since 1982. Unionized workers, however, had agreed to major wage concessions to keep the plant in operation. The same year, pushed by a new breath, Dixon's American headquarters even added the production of permanent ink markers to that of erasers and correction fluid already manufactured at Acton Vale.
Last January, in the greatest discretion, the factory was bought by the Italian multinational Fila. She quickly chose to put the key in the door for good. Production is expected to be dispersed in China and Mexico, in particular.
"It is not because we are not profitable. We’re just not quite profitable enough, says Isabelle Marquis. But it is not only the fault of the Chinese. People here want to pay the lowest price possible when they go to Wal-Mart, our big competitor. It's a vicious circle! We shoot ourselves in the foot by constantly wanting to pay the cheapest price. ”
The fact remains that Ms. Marquis does not hesitate to recall that the salary of a Quebec employee is equivalent to that of 36 Chinese employees. "We have real pearls at the factory. But even if they are super performers, they cannot be as fast as 36 people! This is the sad reality ... ", she laments.
Resignation
Diane, a factory worker, says the atmosphere is "ordinary" these days at Dixon. "It is not easy, but this time, we had no choice but to accept the facts," she says with resignation. All employees will be entitled to a separation bonus corresponding to one week's salary per year of service. A reclassification committee has also been set up to help them find a new job. But Diane and her colleagues are especially worried about not finding a job offering them such good conditions. The lowest paid worker currently earns $ 13.20 an hour at the Acton Vale plant. 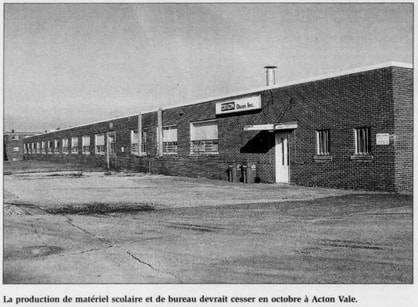